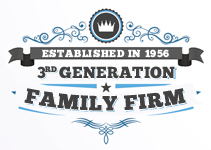 David Renton and Sons in the Scottish Borders 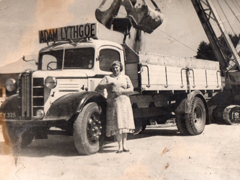 David Renton & Sons was established in 1956 by David and Jessie Renton and after spanning 7 decades is now in its 3rd generation.

Despite being based at Fogo near Duns, the first contract our company embarked on was the haulage of lime for Adam Lythgoe in the Lanarkshire and Strathclyde areas. Our first lorry was an Albion Clydesdale, which was painted in Adam Lythgoe's livery. There were no tippers in those days - it all had to be shovelled off by hand.

Over the next two or three years we gradually progressed to haulage and spreading of lime and slag within the Borders. 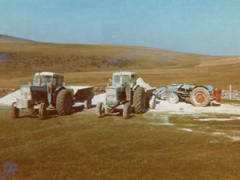 By this point the second generation was becoming more involved in the company's operations. From this we progressed to the movement of grain during the harvest season. However the requirement for less seasonal and a more regular work load saw the transition to quarry work around the early/mid 70's when major projects like the Galashiels Road Network, Torness Power Station, Berwick By-Pass and a Gas Pipeline came on stream.

The late 80's/early 90's saw the beginning of major changes within David Renton & Sons, we started to increase the fleet from 3 tipper lorries operated by 3 of David & Jessie's sons to 4 lorries and an employee. We then embarked on contracted work with Kings (now Tarmac) working from Craighouse Quarry near Melrose. 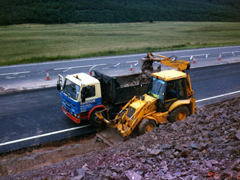 With an increasing work load and fleet the early 90's also saw the involvement of the 3rd generation of Renton's. The 90's also saw the change from a mixed fleet of Volvo, Scania, DAF, a Merc and a TK Bedford to an all DAF Fleet.

During the 90's we also developed our demount system which allows us to operate a much more flexible interchangeable body system, which enables our vehicles to carry a wider range of materials.

The boom of the early 21st century saw a major increase in work load saw us take on an exempt tip facilities near Selkirk and Kelso and the creation of a subsidiary company based in Northumberland, giving us a larger customer base and a fleet which at its height included 22 tipper lorries, a potato bulker and a brief spell with road sweepers.

Please feel free to contact us by giving us a call using the click to call free feature or alternatively you can complete our simple contact form on the "Contact Us" page. Make David Renton and Sons your premier choice for tipper hire.